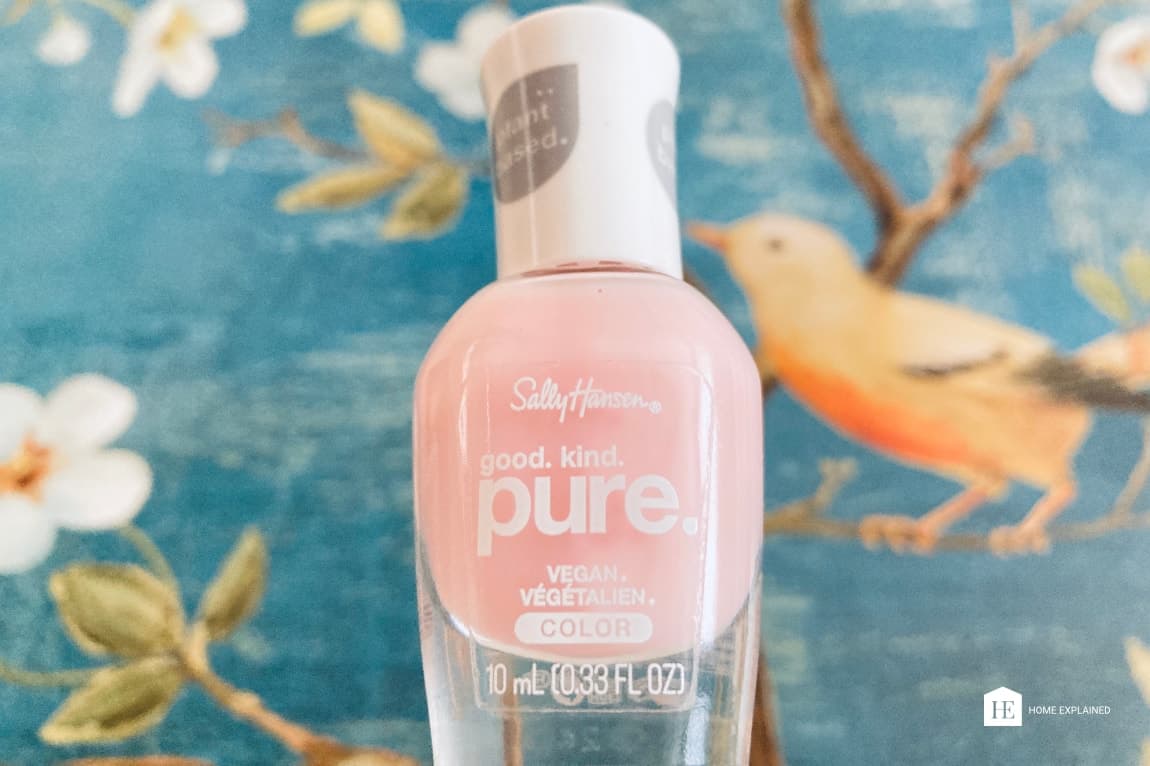 A well-known brand, Sally Hansen, has recently launched a new nail polish line called GOOD. KIND. PURE. It is advertised as their first plant-based 100% vegan nail polish, which is “16-Free”. But is Sally Hansen Pure non-toxic?

The “16-Free” indicates 16 ingredients that are not present in the product. Those ingredients are (source):

Even though the list seems impressive, it does not tell us whether the Pure nail polish is non-toxic. So let’s look at what is actually inside.

How did I test the toxicity?

How did I test the toxicity?

I warn you that this part is quite lengthy and boring ????, so if you just want to find out if the Sally Hansen Pure is non-toxic, click here, to skip this part. If you want to learn the limitations of this post, keep reading.

At first, we should look at what qualifies as a toxic substance. In Merriam-Webster dictionary (source) “toxic” is defined as:

“containing or being poisonous material, especially when capable of causing death or serious debilitation.”

Under the definition of the term “toxicity” there is an excellent explanation of the relativity of toxicity (source):

“Toxicity is often a relative thing; in the words of a famous old saying, “The dose makes the poison”. Thus, it’s possible to die from drinking too much water, and lives have been saved by tiny doses of arsenic.”
“…With some poisons, mere skin contact can be lethal; others are lethal when breathed into the lungs in microscopic amounts.”

As you can see, the toxicity of a substance is not only based on the substance itself but also on the amount used and the way you are using it. However, in this post, all ingredients were evaluated based on two websites: CosDNA and EWG’s Skin Deep, and it was not taken to account, that the ingredients are used solely on nails. The reason being it would be impossible for me to accurately evaluate the exact safety score of an ingredient when used in nail polish.

Each ingredient was given a safety score from 1 to 10 (where 10 is the worst value) and for better readability a color-code (score 1-2 is green, 3-6 orange, and 7-10 red). In some cases, an ingredient can have a range of scores, which indicates that, e.g., an ingredient poses a higher risk if it is used in a lipstick due to a higher risk of ingestion. For this post, the ingredients were color-coded based on the highest score.

I acknowledge that for this reason, the analysis is not entirely accurate. Also, that the resources (CosDNA & EWG) might have some inaccuracies. However, as a regular consumer, I have chosen to use this method to help me identify at least some of the potentially toxic ingredients.

It is important to say that the Pure line consists of three products: Color, Top Coat, and Hardener, which differ in ingredients. To find out if the Pure nail polish line is non-toxic, I have analyzed the ingredients of all three products.

Keep reading to find out how Sally Hansen Pure compared to other nail polish brands, or click here. 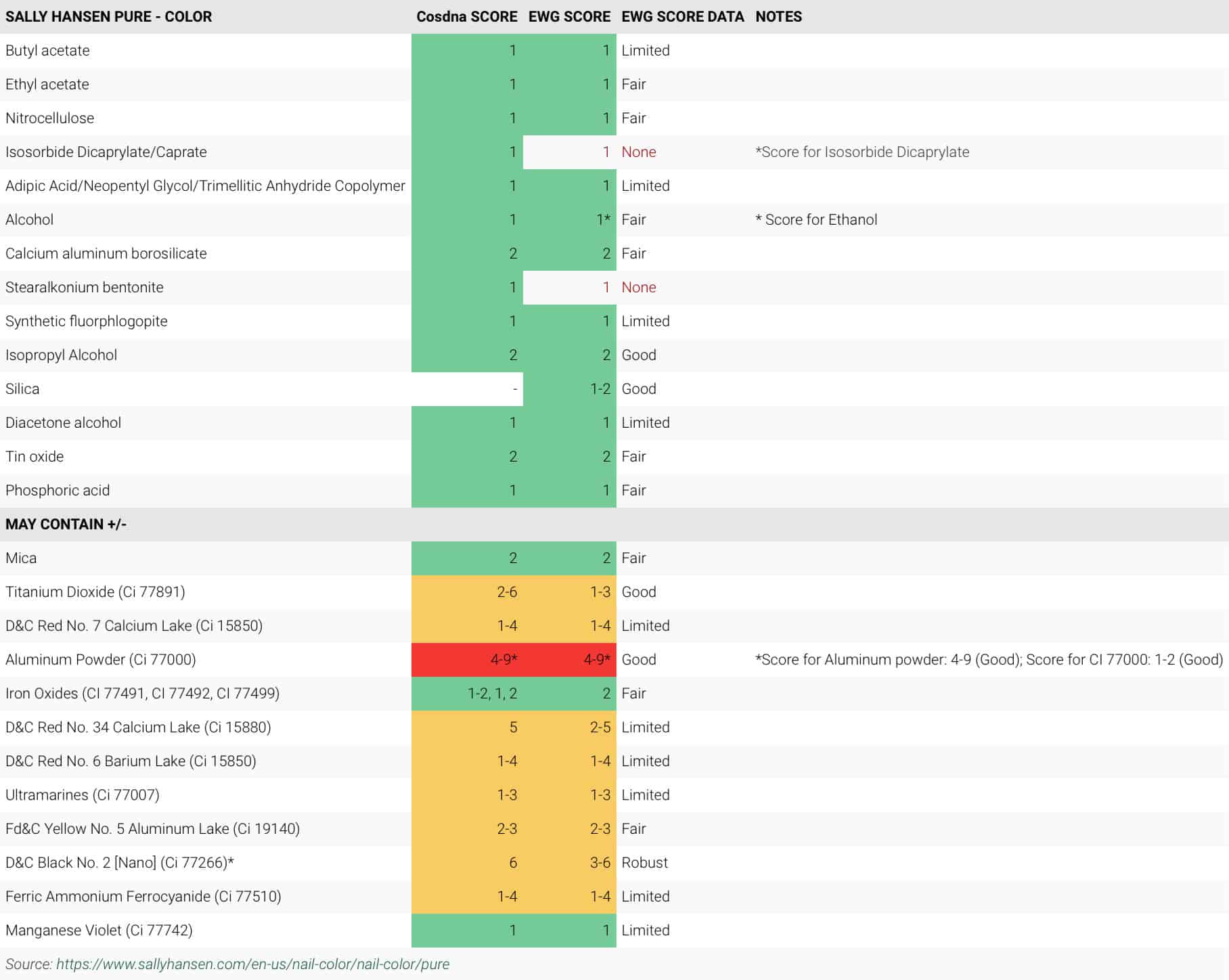 Below you can find the ingredients of Sally Hansen’s Pure Top Coat and Hardener. Even though one might think that since the the top coat and the hardener don’t contain colorants, the safety score should be amazing, but it is not entirely true. As you can see below, some ingredients have a slightly higher safety score, but still nothing extreme. 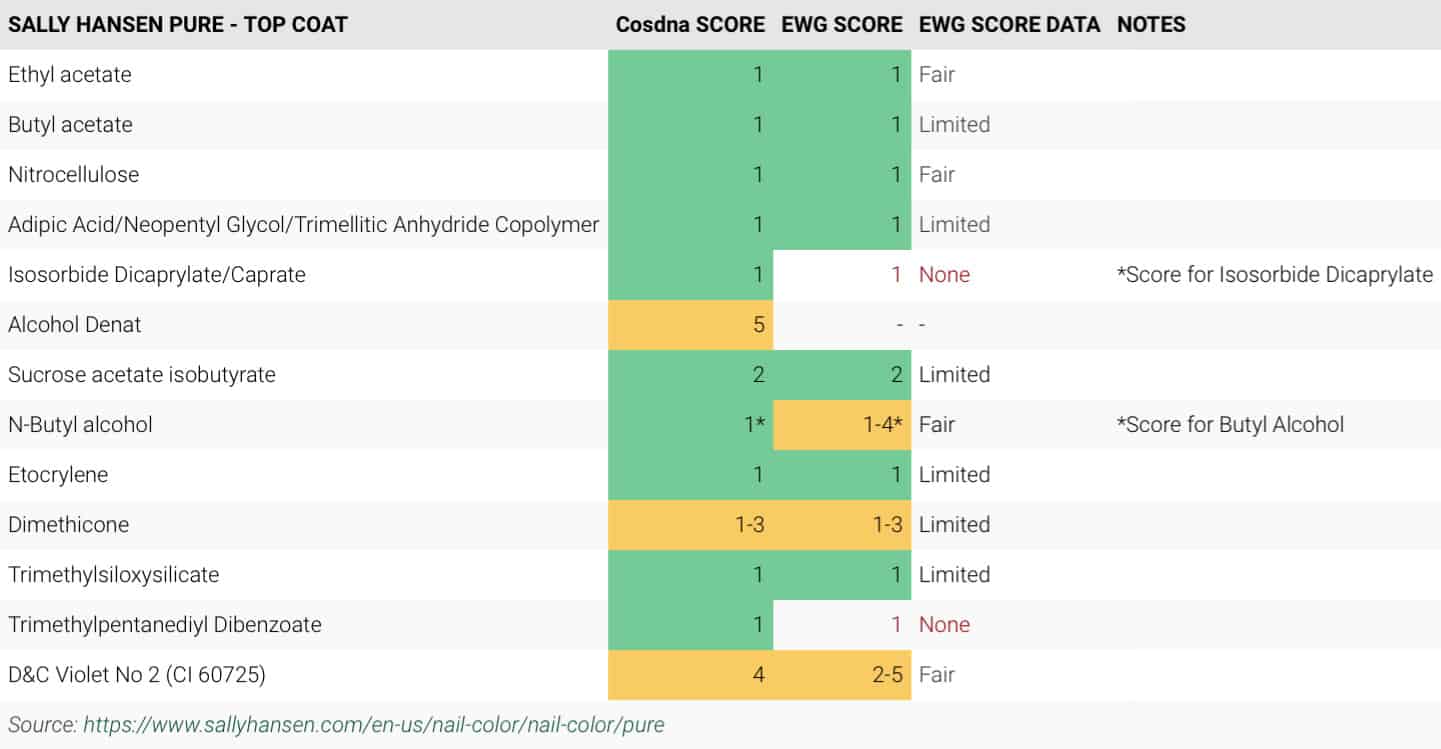 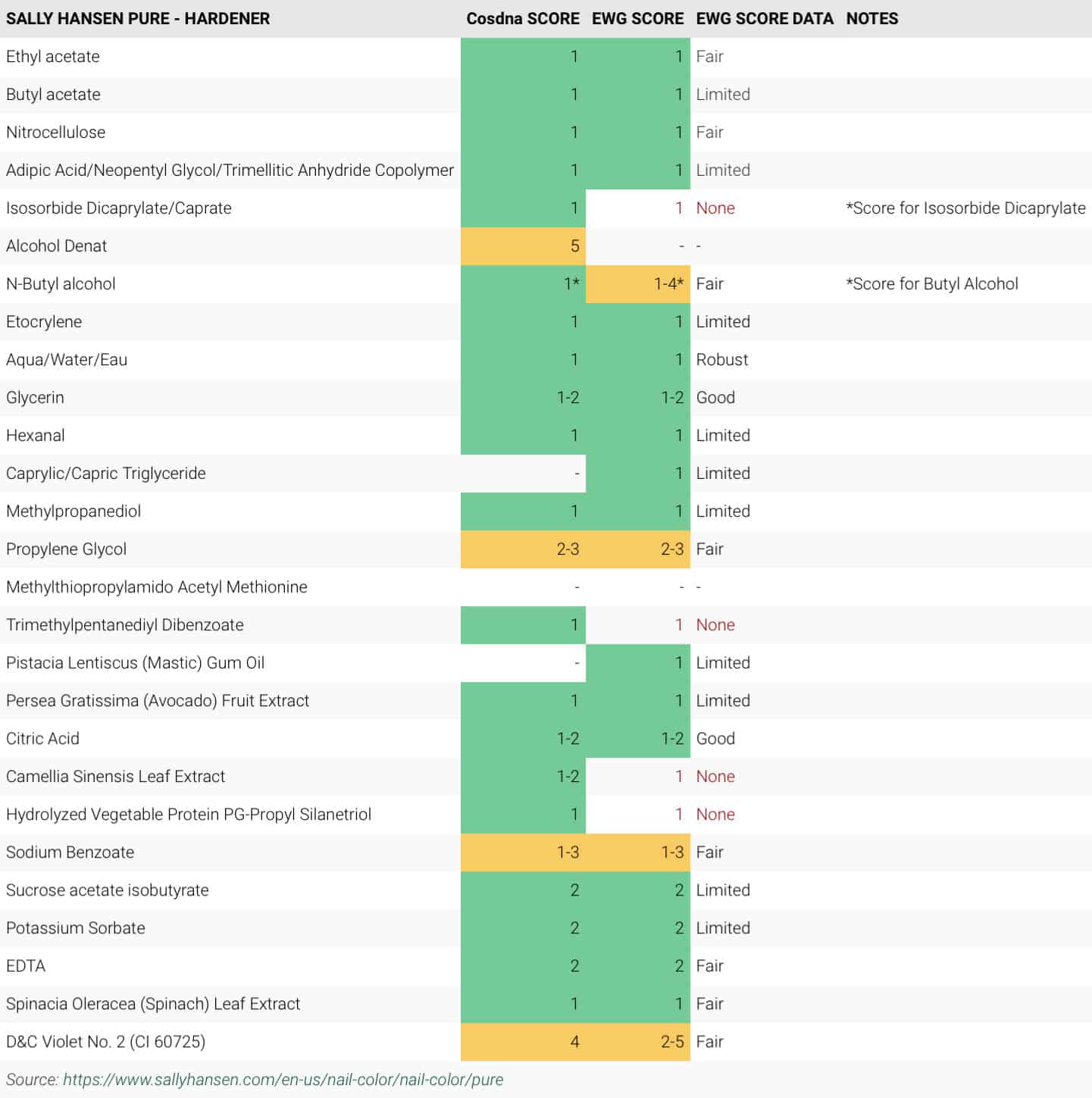 I have decided to compare the Sally Hansen Pure polish with two other brands, that are often mentioned as non-toxic alternatives: Zoya and Ella+Mila. Also, to get an idea, how “toxic” regular polishes are, I have added one representative of nail polish that is not advertised as a “cleaner product” – Sally Hansen Miracle GEL. Below you can find three tables with the ingredients. 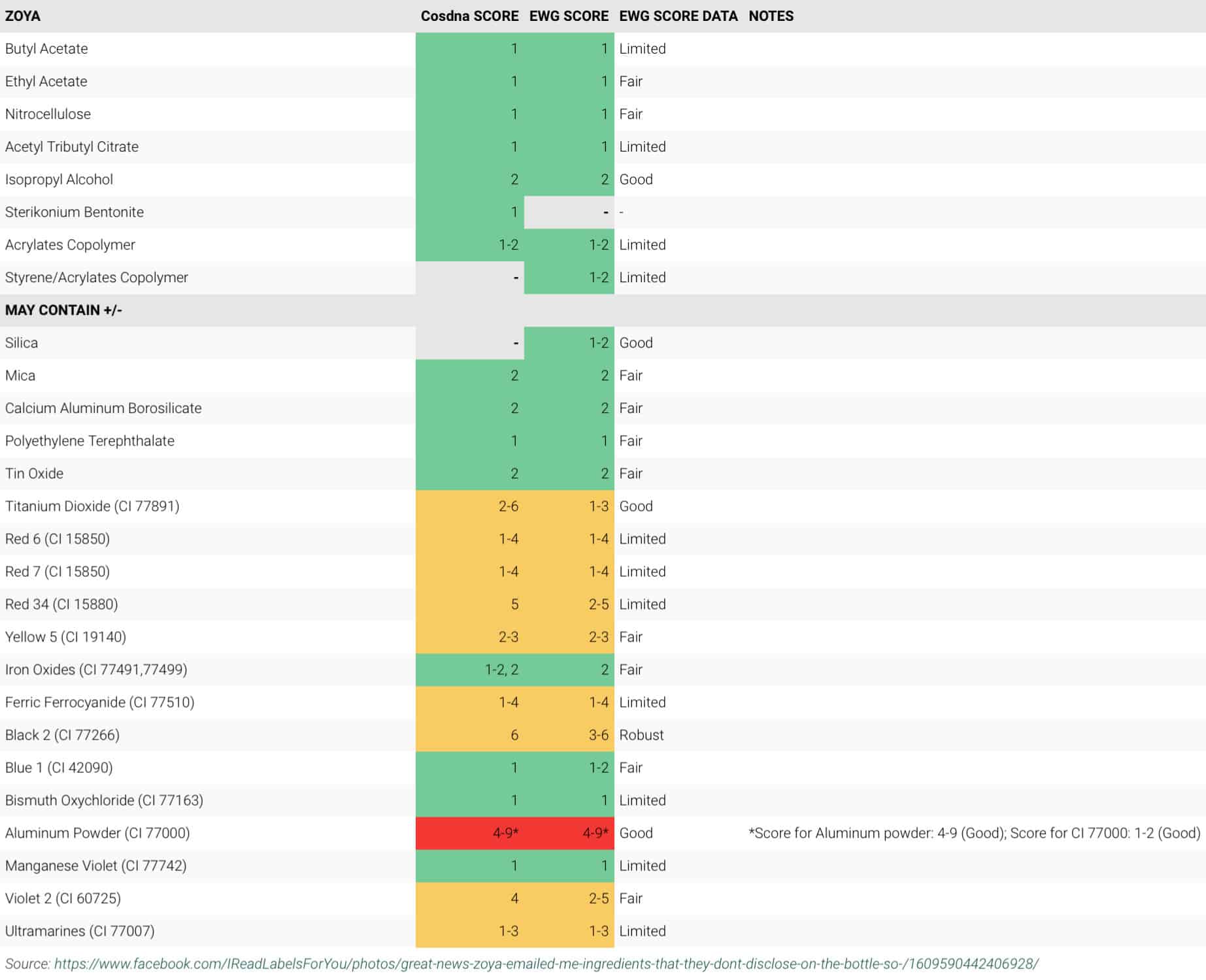 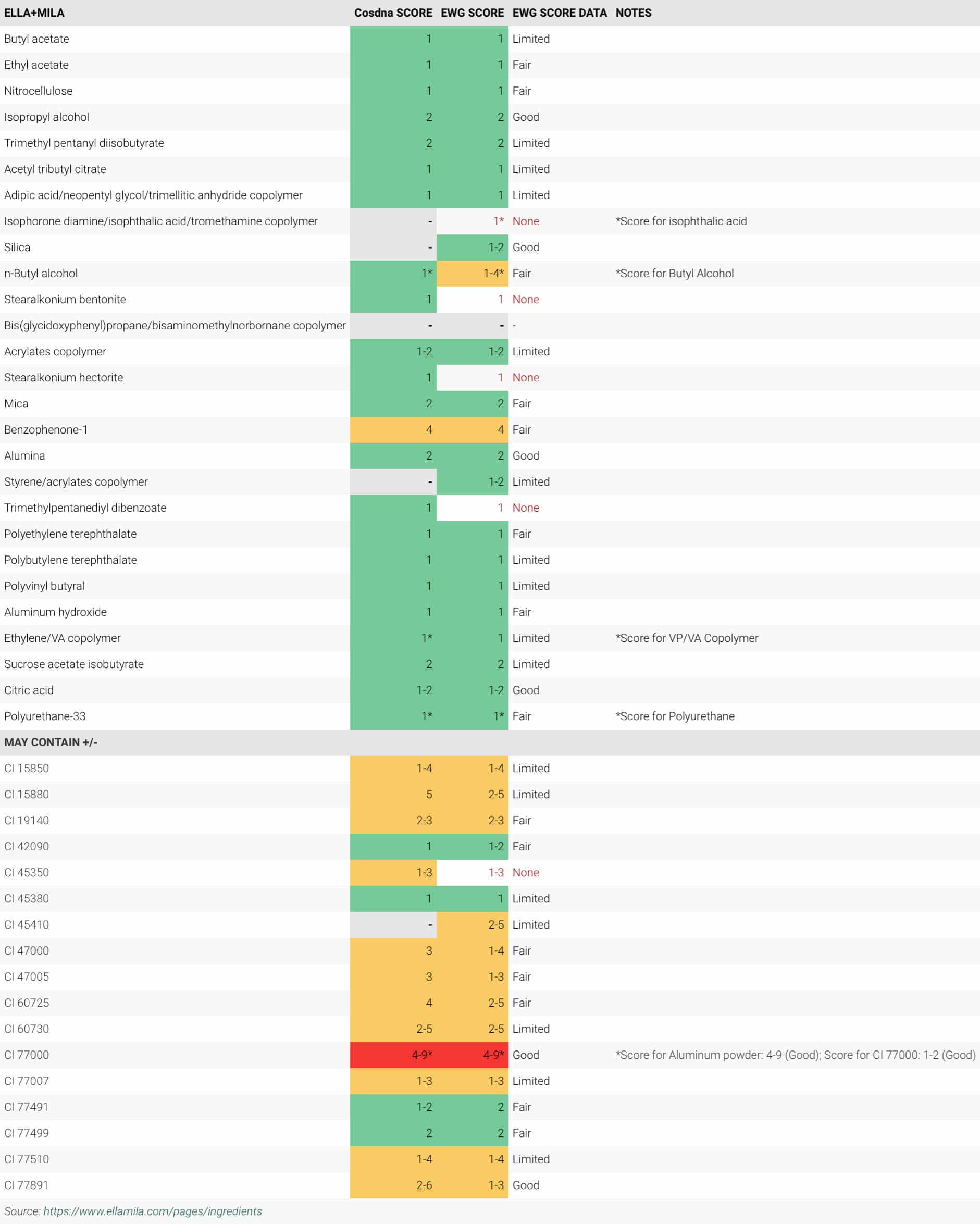 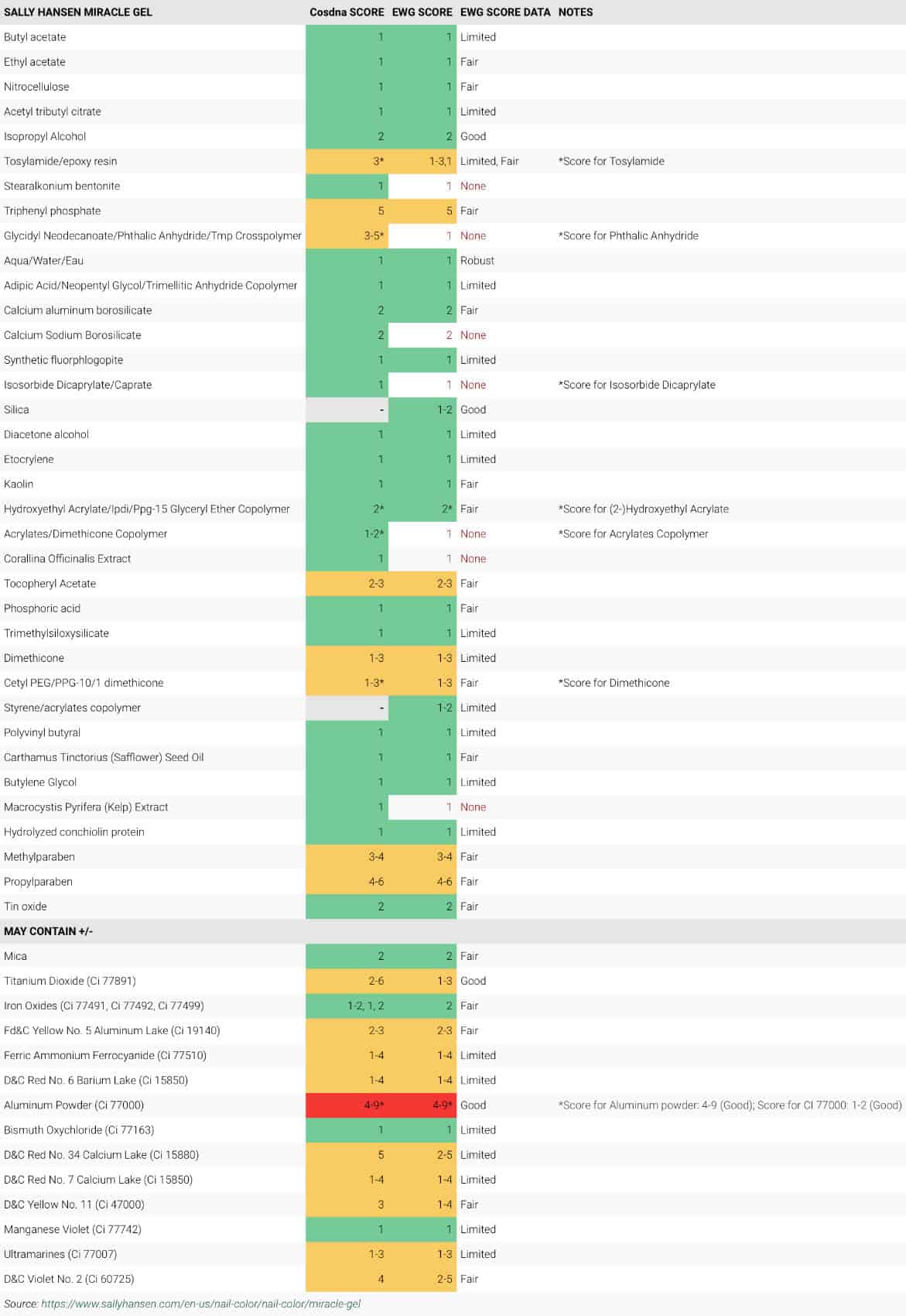 As you can see, Sally Hansen Pure’s ingredients have lower safety scores than Ella+Mila and more or less similar scores as ZOYA. Since I didn’t find the current ingredients of ZOYA nail polishes to me, Sally Hansen Pure seems like the best option. One thing to note is that the most “dirty” ingredients are the colorants, and they do not differ much across the brands.

It is troublesome to state that Sally Hansen Pure, Ella+Mila, or Zoya nail polishes are non-toxic. However, you can surely choose a cleaner option. If you want to avoid toxic substances altogether, you should consider stopping using nail polish. But if you are looking for a “cleaner” alternative, Sally Hansen Pure nail polish seems like a great choice. Also, in my opinion, Sally Hansen Pure is a better option than Zoya or Ella+Mila.

If you have decided to try the Sally Hansen Pure nail polish, below you can find Amazon links.

As an Amazon Associate, I earn from qualifying purchases. If you purchase anything using Amazon links on this website, I will get a tiny commission. It doesn’t cost you a thing but helps this website grow.

Thank you for your support! 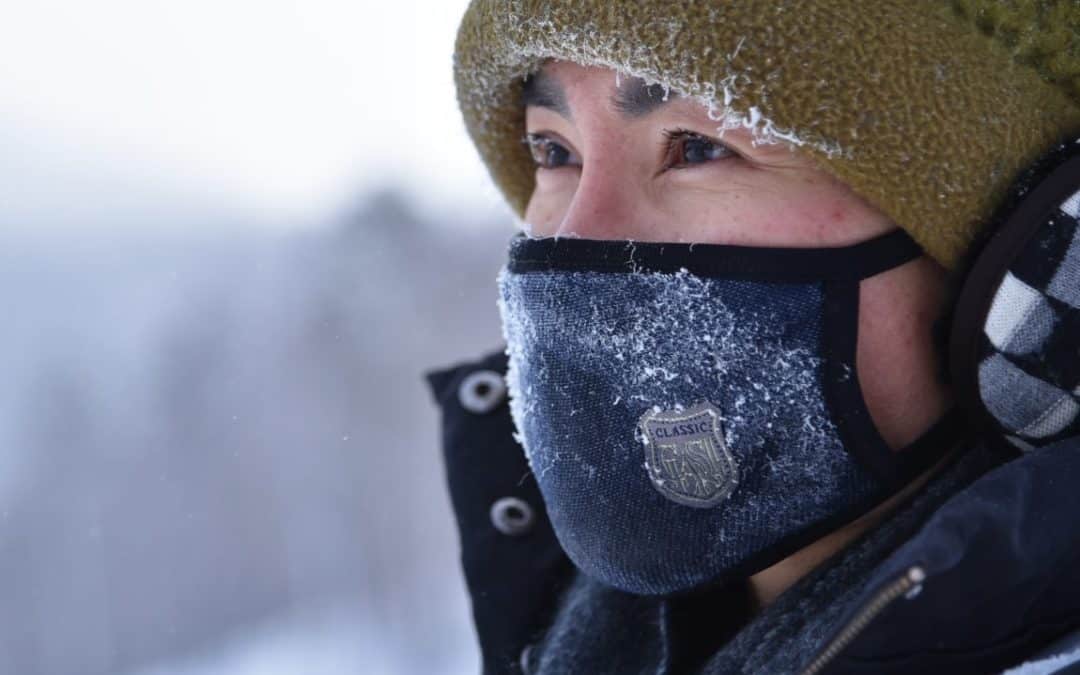 The Centers for Disease Control and Prevention has published a guide on how to protect yourself from the coronavirus. Among other advice, they have published information on the use of face masks (SOURCE). The bottom line was that if you are sick, you should wear a... 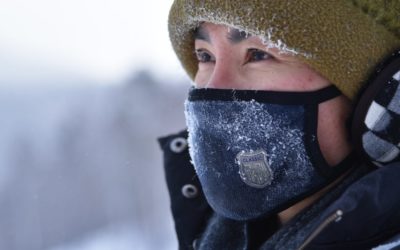 The Centers for Disease Control and Prevention has published a guide on how to protect yourself from the coronavirus. Among other advice, they have published information on the use of face masks (SOURCE). The bottom line was that if you are sick, you should wear a...

As an Amazon Associate I earn from qualifying purchases.
If you purchase anything using Amazon links on this website, I will get a tiny commission. It doesn’t cost you a thing, but it helps this website grow.
Thank you for your help!